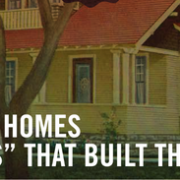 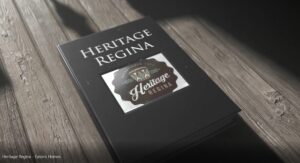 A century ago, with our flourishing farms and urban centers, there was a high demand for new homes. Designers and skilled trades people were in short supply. Eaton’s, Sears and Aladdin Homes shipped thousands of homes to the Prairies by rail and they were assembled by local labour.

Similar to the way we order online today, these kit homes could be ordered to exact specifications. Millwork, plumbing fixtures and even furniture could be included with your shipment. 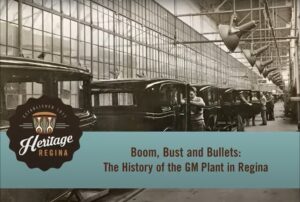 Boom, Bust and Bullets: The History of the GM Plant in Regina
credit: Dale Johnson

Discover an important piece of Regina’s rich automotive history with Dale Johnson. Adapted from the lecture Boom, Bust and Bullets: The History of the GM Plant in Regina, part of the 2020 Lecture Series held at the Artesian. 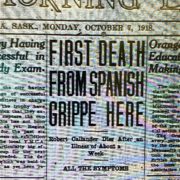 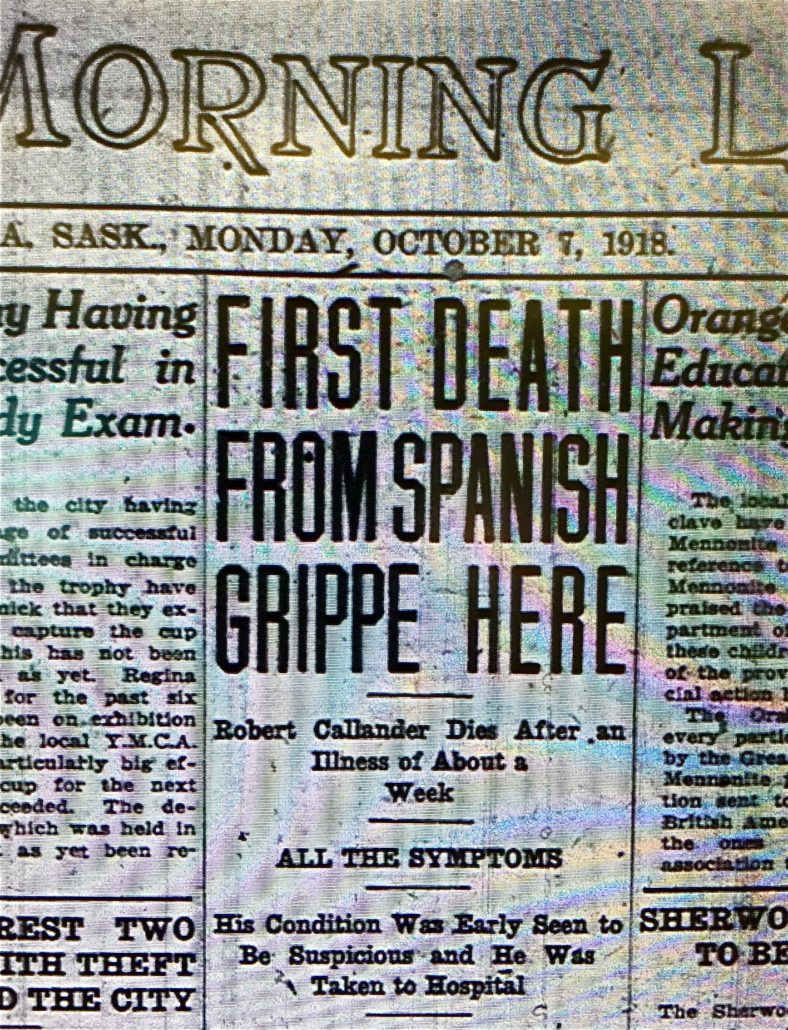 The first death from Spanish flu in Regina was reported on Oct 7, 1918.

This article was originally published by the Regina Leader-Post on March 20, 2020. It is reprinted here with permission.

At first, people in Saskatchewan showed little interest or concern about reports of a new flu in other parts of the world.

As the summer of 1918 turned to autumn, there were more newspaper reports of the Spanish flu in cities in the eastern U.S. and Canada.

For example, on Oct.1, 1918, Regina’s Morning Leader newspaper reported there were 460 new cases in Philadelphia in the previous 48 hours, bringing the city’s total to 2,327 cases and 14 deaths.

By Oct. 3, the Leader reported that the Spanish flu was “rapidly spreading over (the) United States” and was in 43 of the 48 states.

END_OF_DOCUMENT_TOKEN_TO_BE_REPLACED 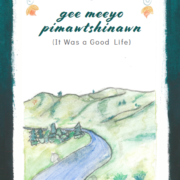 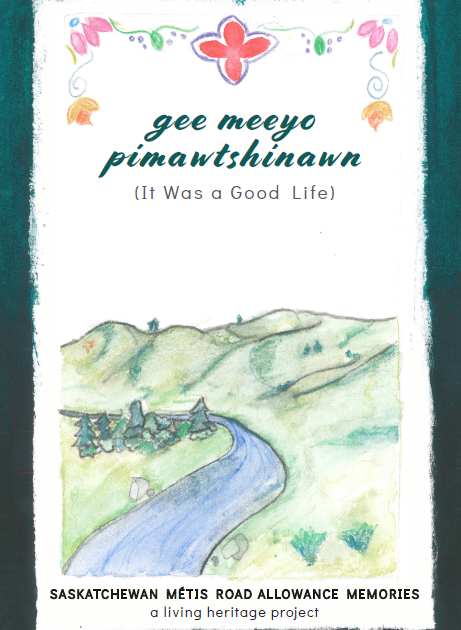 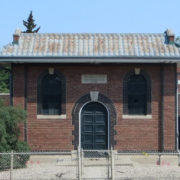 It was the end of the line for SaskPower’s Substation No. 2 on the 1900 block of Elphinstone Street. Built in 1930 by the Regina Light and Power Company, the substation made it possible to extend power services to developing neighbourhoods. The building was designed to fit in with its residential environment, a practice that was often used at the time. END_OF_DOCUMENT_TOKEN_TO_BE_REPLACED 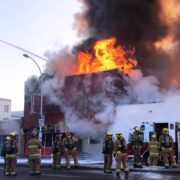 The Stokes Block was Constructed between 1905-1907 and started out as a commercial apartment building.

In 1920 it was succeeded by various Chinese merchants and restaurateurs. One of the most well-known was Yick Lee Lung Company general store, which opened in 1928. and would later become a confectionery until 1974. The building was occupied by Lang’s Cafe until April 4th, 2018 when it caught ablaze and burned to the ground.

It’s always a loss when we lose the tangible essence of our historic past.

This building is significant as a representation of Regina’s multicultural settlement and of the experiences of our Chinese-Canadian communities and how they contributed to our history.

There are countless untold tales and celebrations that lie within our city, buildings and the people that built them that have shaped the course of history in Regina.

With images by The Leader-Post and CTV Regina 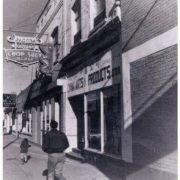 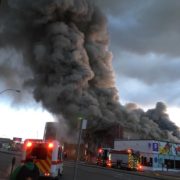 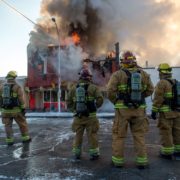 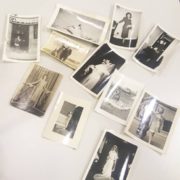 Maria Ochoa and Kimberly Dosamantes run an Instagram page called Saved the Spot, where they post pictures of bookmarks and other items found in thrift shops.

“Sometimes we just go to thrift shops and we look for old bookmarks,” to post on the page, said Dosamantes.

“I just like finding things that people left behind,” she added.

One day in a Chicago goodwill store, Ochoa said she was doing her usual book browsing for hidden gems to share on the page. Instead, she found something “even better.”

“I ended up finding this pack of pictures in the book,” said Ochoa.

There were several family pictures with a stamp on the back of the photos indicating the photos had been printed at TruLife Photo Co., located at 11th Avenue and Cornwall Street in Regina.

“We just decided to post them. Kim wanted to search to find the family [and see] if we can send these pictures to them, because we know they’re probably valuable to them,” said Ochoa.

Dana Turgeon, Regina’s historical information and preservation supervisor, said that most of the dozen photos appear to be from the 1940s. She says the clothing worn in the photos is very emblematic of that era.

Turgeon also said it seems like the woman in the photos is wearing outfits she would have had in her trousseau — a collection of clothing and linens a woman would keep for her marriage, a common custom in that era.

Turgeon hypothesizes that some of the photos depict the woman on the day after her wedding, heading out in her travelling clothes.

“She has a nice suit jacket on, a skirt and a shirt. It fits with that timeframe,” said Turgeon.

The photos were printed by TruLife Photo Co. in Regina, which was located at 2136 11th Ave., near the entrance to the Bay in the Cornwall Centre today.

TruLife was also listed as the photographer for the 1948 city council photo, said Turgeon.

In one photo, a man and woman are walking across a street, and a shop can be seen in the background with an awning that seems to read “Jolly’s Drugs.” There was a Jolly’s Drugs located at 1799 Rose St. back at that time.

There is also a picture where a man stands in front of a shop that seems to be called Cafe Cadillac, but it remains a mystery where that shop was located.

Turgeon said there doesn’t seem to be a café with that name in Regina from the same time period, but there is a town in Saskatchewan called Cadillac, approximately 240 kilometres away from Regina.

“We’re trying to really find anything about their family,” said Dosamantes.

The women posted the photos to Reddit in hopes of finding more information so they could send the pictures to the family.

“I would really love it if we could find the family of this woman, and the man,” said Dosamantes.

“My mom lost her wedding photos a long time ago, and she used to always talk about if she could just get them back, how happy that would make her.”

Dosamantes said she hopes by finding the family and returning these photos one day, she can pay it forward to another family who lost valuable keepsakes. 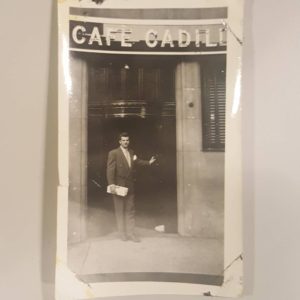 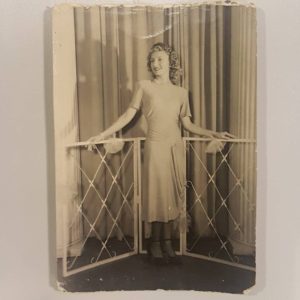 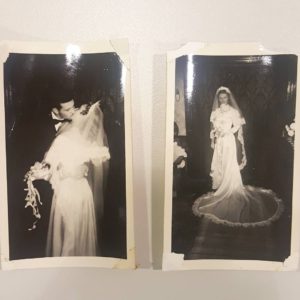 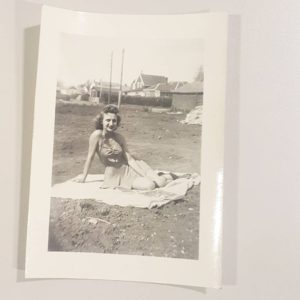 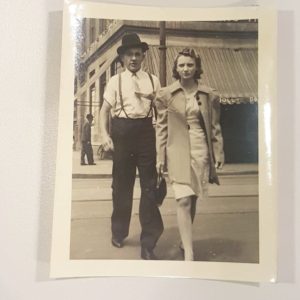 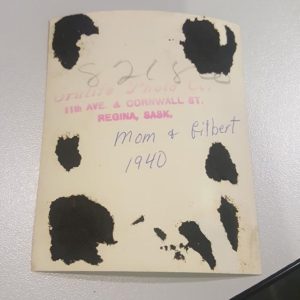 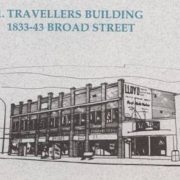 Suddenly on March 8, 2017, and as a result of a tragic fire, the Travellers Building passed at the age of 88.  She had been neglected for some time and in poor health.  Designed by architects Storey and Van Egmond in 1929 she played an important role in the commercial development of the city of Regina.  The original developer was George Broder, a local businessman, who is best known as the developer of one of the early neighbourhoods, Broder’s Annex, on his farmland east of Winnipeg Street.

The main floor initially housed A.B.M. Motors Ltd (car dealership and repair) as well as some smaller businesses such as “Ed’s Lunch”.  The upper floor was occupied by short-term sales offices and space for traveling salesman – where the building gets its name.   Other tenants over the years included Group Medical Services (1949-1964) and use as the city bus terminal (1936-49), but the building’s greatest call to fame was perhaps the second floor Arcadia Ballroom where a 1920’s style horsehair dance floor kept Regina’s population dancing during the difficult depression years and until the end of the War (1929-45).  This leaves Danceland in Watrous, built in 1928 and Rock Church, an 80+ year old former Ukrainian Hall in Saskatoon as the only other original horsehair dance floors in Saskatchewan.

She leaves to mourn a heart-broken heritage community and citizens of Regina who ask the questions: “Was this demolition by neglect?” and “What can the community do to make sure that other vacant heritage buildings are re-purposed and do not suffer the same fate?”  Cremation has taken place.  In lieu of flowers and in memory of the Travellers Building please consider attending a Heritage Regina walking tour to learn more about  the history of our city or talk to your city councilor and advocate for preservation of Regina’s Cultural and Built Heritage. www.heritageregina.ca 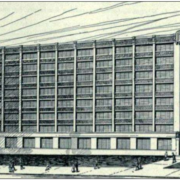 This pictorial essay by Frank Korvemaker was commissioned by Heritage Regina and originated as a result of an e-mail from Jeannie Mah, a Regina-based ceramic artist and Board Member of the Architectural Heritage Society of Saskatchewan. On October 30, 2015 Jeannie reported that an application for demolition of the Simpsons-Sears Warehouse had been received by the City of Regina. As this building is on the City’s Heritage Holding Bylaw, a 60 day assessment process was initiated by the City Administration on or about Oct. 21, 2015 to prepare a report for Council on the heritage value of the building.