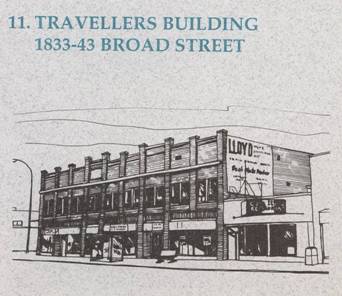 Suddenly on March 8, 2017, and as a result of a tragic fire, the Travellers Building passed at the age of 88.  She had been neglected for some time and in poor health.  Designed by architects Storey and Van Egmond in 1929 she played an important role in the commercial development of the city of Regina.  The original developer was George Broder, a local businessman, who is best known as the developer of one of the early neighbourhoods, Broder’s Annex, on his farmland east of Winnipeg Street.

The main floor initially housed A.B.M. Motors Ltd (car dealership and repair) as well as some smaller businesses such as “Ed’s Lunch”.  The upper floor was occupied by short-term sales offices and space for traveling salesman – where the building gets its name.   Other tenants over the years included Group Medical Services (1949-1964) and use as the city bus terminal (1936-49), but the building’s greatest call to fame was perhaps the second floor Arcadia Ballroom where a 1920’s style horsehair dance floor kept Regina’s population dancing during the difficult depression years and until the end of the War (1929-45).  This leaves Danceland in Watrous, built in 1928 and Rock Church, an 80+ year old former Ukrainian Hall in Saskatoon as the only other original horsehair dance floors in Saskatchewan.

She leaves to mourn a heart-broken heritage community and citizens of Regina who ask the questions: “Was this demolition by neglect?” and “What can the community do to make sure that other vacant heritage buildings are re-purposed and do not suffer the same fate?”  Cremation has taken place.  In lieu of flowers and in memory of the Travellers Building please consider attending a Heritage Regina walking tour to learn more about  the history of our city or talk to your city councilor and advocate for preservation of Regina’s Cultural and Built Heritage. www.heritageregina.ca

A fly-by on the design of revitalized College Building at University of Reg...
Scroll to top