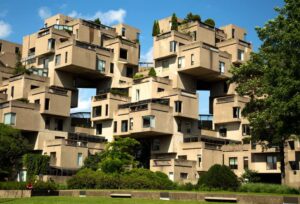 Today in our lecture series on the architecture of home, we begin to explore some more modern styles!
The Arts and Crafts movement in England turned its back on the historical precedents of the earlier styles, leading to the development of the Craftsman and Prairie styles. After WW1, the period styles flourished, but returning WW2 Soldiers did not want to build from these old styles that they had seen while on the battlefield.
The Modern Movement offered new styles, free from historical overtones for them as they started a new life back home. Suddenly the ‘honesty of structure’ celebrated an exposed framing system. New evolving technologies made large uninterrupted expanses of glass possible and walls invisible.
Advances in heating and cooling made homes more comfortable and clean. The Ranch style home became the most common house in North America due to it’s simplicity and affordability. Without any historical significance, new contemporary styles could take on many forms, with creativity and emerging building practices. 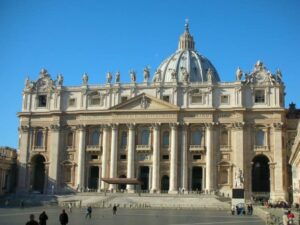 In today’s post on the architecture of home, we move on from medieval architecture to explore the Renaissance Classical style!
Italy had never really embraced the Gothic style of the Medieval tradition, and it was there in the 15th century that a new direction in literature, science, philosophy, art and architecture was developing. Architects in Florence were busy designing the many churches which were in demand. These amazing structures took the form of classical Roman temples and were built of stone, featuring symmetrical floor plans and facades with columns, pediments, pilasters and rounded arches (never pointed). A series of repetitive elements would repeat throughout the façade.
Here is a phrase to remember…”the duality of the parts reinforces the unity of the whole”. This time architects favored the horizontal dimension over the emotional vertical Gothic spires.
The Renaissance Classical style has stayed relevent over the centuries as many civic buildings adopted the style because of the democratic theories introduced with the style. The Beaux Arts and Neo-Classical styles which grew out of this formal style will be explained in upcoming posts. 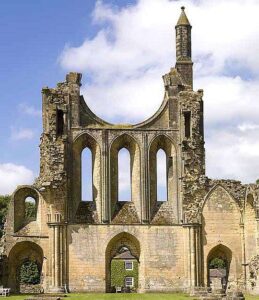 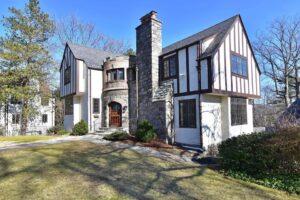 Medieval  architecture (500AD – 1500AD) followed the previously featured Ancient Classical styles.  Until this time, the main focus of structures was the design of the iconic monumental exteriors.  When the desire for large religious and civic buildings demanded assembly space, the race was on to see who could design and build the tallest and largest building.  The emphasis was on the vertical dimension as buildings could now achieve soaring heights.  The use of Gothic pointed arches helped achieve this and skilled artisans worked together to introduce artwork, carvings, and stained glass to further enhance the style and the experience of being inside them. 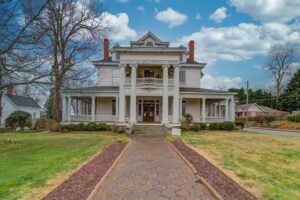 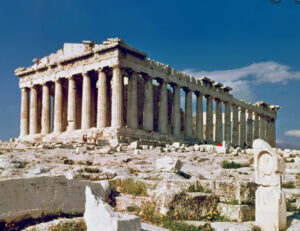 The ancient architecture of Greece (100 BC – 500 AD) featured full height entry porches comprised of rows of large columns of various classical orders. These structures usually featured a symmetrical two storey façade, and a low sloped gable roof.   Doric, Ionic and Corinthian styled columns were utilized, which could be round, square or octagonal.  Despite the tools and technology available at the time, these structures were extremely precise and stable.  Marble was the preferred material with wood timber roofs.

This monumental style was the basis and inspiration for three subsequent styles: Early Classical Revival, Greek Revival, and Neo-classical.  We will be featuring these in upcoming posts. 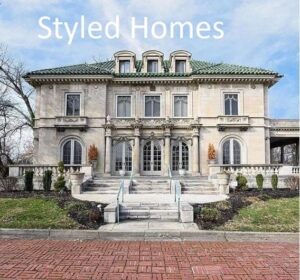 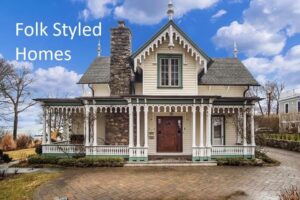 There are two principal types of homes which help us determine a style. “Styled homes” are modeled after one of four principal architectural traditions: Ancient Classical, Renaissance Classical, Medieval and Modern. There is a conscious attempt to follow the massing, materials and features of a certain style. We will touch on each of these in the next few posts.

“Folk Homes” are what we typically see in our cities and towns. Many of these homes are built with little regard for design, but with the need for basic shelter and affordability.

Many ancient styles became popular again in the 19th century. These are known as ‘Revival’ adaptations. More recent interpretations of these old styles may have the prefix ‘Neo’ added. Many current styles are based on these versions of these classics.” 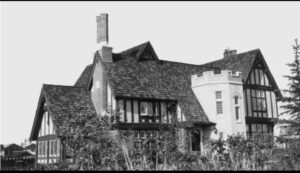 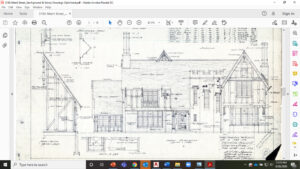 While some architects and designers might strive to keep the elements of the various architectural styles intact, many, including Regina’s firm of Storey and Van Egmond embraced and experimented with a more eclectic combination of styles. As we start out to become armchair architects, this certainly makes things complicated and challenging.

The first two decades of the 20th century were unique in that there were architectural styles coming out of the US and Europe which were a departure from the austere and budget conscious first homes built here.

Widely available magazines featured beautiful homes which local developers and home owners wanted to emulate. The railway and mechanization made it possible to order in detailed millwork and trim packages. This was a time of experimentation as architects tried new and historical styles. Very often it was a combination of several styles that we now refer to as Eclectic stylings.

Images show the original architectural blueprints for and a photo of the finished historic Cook Residence located at 3160 Albert St., built in 1929 in the Tudor Revival style. 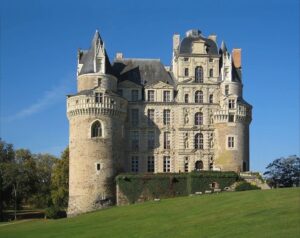 Today is the day! We’re so excited to launch our first ever virtual lecture series, right here on Facebook and Instagram. We invite you to join local historian John Robinson to explore the elements of what make our houses feel like home.

We’re presenting an online class that will take you on a comprehensive architectural journey beginning with the iconic structures of the Greeks and Romans and wrap up with the contemporary styles of today.

If your home is your “castle”, it can take many forms. Most of us are fascinated with houses and have very definite views on what we would call home. This introduction to styles will offer an overview of what is important to the style so restorations and upgrades can be planned correctly. It might help you to become an armchair architect as your spot a unique home and are able to identify its style! We welcome you to share your questions and comments. 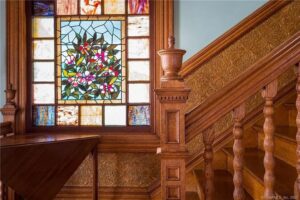 Heritage Regina is excited to launch our online “lecture series” What’s Your Style, Understanding Regina’s Residential Architecture. Starting on September 14, John Robinson will be featuring the many architectural styles that shape our idea of home, and the elements of each style. This seven week presentation features weekend quizzes with great prizes.

Stay tuned for updates on our Stained Glass Workshops, which are being planned for this fall.

Boom, Bust & Bullets: The History of the GM Plant in Regina
Scroll to top