An Evening with Kay Parley

Kay Parley suffered her first breakdown in Toronto in 1948.

She became a patient at the “The Mental”—the Weyburn Mental Hospital. In the 1950s, Kay became a psychiatric nurse training at
“The Mental” and later went on to teach social sciences, and write articles for journals 1231 Broad Street specializing in mental illness.

Inside the Civic Museum series The Weyburn Mental Hospital gained international recognition for its research and advances in patient care
and was named the most improved mental hospital in North America. Notable among its therapies was the use of LSD which has since gained renewed interest as a treatment for mental illness and addiction. 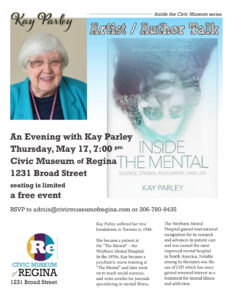